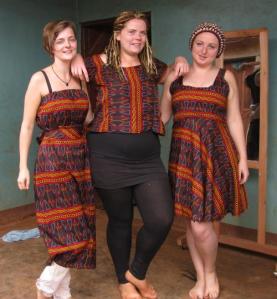 I had that Monday morning feeling that follows a bank holiday. The elections went without anything too news worthy. The general view of most people was that the ruling party was going to get back in again because the opposition was too disorganised. Many of them were more interested in the local elections, the candidates who were going to deal with local issues. Issues such as ensuring that the road on which I slipped and fell on Sunday is paved. Someone pointed out that the clinic across the road from our house deals mainly with pregnant women.

‘What if it was one of them?’ he asked. ‘People’s lives are being put at risk in small ways that can be easily remedied.’

While some people seemed excited about the elections, many were quite resigned to the fact that nothing was going to change, and that there was little point wasting their time voting. It seemed very reminiscent of the statements I heard in England during the last general election.

People are losing faith in what we still call democracy, in the emerging as well as the mature democracies.

Three new volunteers arrive from the UK today, two men and a woman. Unfortunately they’d booked their flights before the Cameroon Government announced the general election. They were not to know that they would arrive in a country in lock down which made a long and arduous journey even longer and more arduous.

Thankfully it didn’t dampen their spirits as they’re raring to get involved. It looks like they’ll be involved in building the school as well as doing some teaching. Two are here for two weeks and the other for three.

Three of the female volunteers are leaving tomorrow after a two month stint. They worked mainly in the clinic and with the women empowerment groups. I’m hoping to visit these parts of the project at the weekend. They are in a place called Mbosha, which is about an hour’s drive from Kumbo.

I try not to think too much about the constant changes in the children’s lives as people come and go. There is only a small group of core teachers that provide continuity, and these are only available when there’s enough money to pay them.

Majority of the children at the school are either orphans or severely disadvantaged in some other way. It seems what they need most is consistency, yet there is less of this than in the Government schools where teaching is more predictable.

This is not a criticism of the school. The one consistency it provides is a place for the children to come to every week day, and many of them travel up to 90 minutes each way on foot to get there.

And occasionally, as at the moment, there are volunteers who stay for a whole year. There are two young German women who are here for a year on scheme sponsored by their government. They will get a chance to see the children through a whole school year. No doubt an experience which will benefit both volunteer and students.