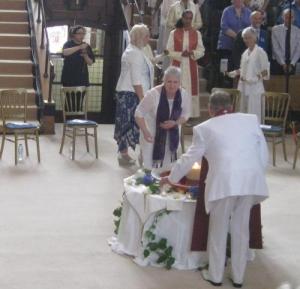 Yesterday I had the pleasure of attending the ordination of two of my friends, Catherine Hughes and Monica Douglas-Clarke as OneSpirit Interfaith Ministers..The event was held at the Second Church of Christ Scientist, Notting Hill, in London.

In what I can only describe as a moving, and at times spectacular, ceremony 28 new ministers were given their licence to practice.

The 28 new ministers and their mentors and supporters

It was an honour to share the journey with Catherine as her supervisor for the two years of the course.

Reverend Catherine Hughes (and me)

There was a part of me that felt like a proud parent because I know just how many personal challenges she had to overcome to arrive at this place.

Monica and Catherine during the ceremony 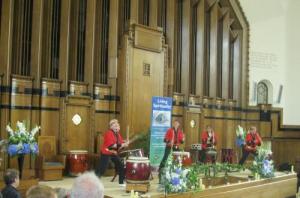 Check me out singing on this music video (about 2 min 17 secs). It has a strong health message. Look out for Dhol King Mall biography later this year, written by my good self.

It was lovely to be back with Writers Without Borders today having missed 2 meetings. Surprised and pleased that the Hippodrome has given us our very own sign so guests no longer have to guess where we are.

I shared a piece I wrote in 2010 ‘Caribbean Cowboy’, but have never read in public. I was extremely pleased with the way it was received. It is such an affirming group! Loved hearing everyone else’s pieces too. Felt like I was back with family.