It began when Mary couldn’t find a piece of music she needed. Tim filled in as we waited with a tale about the birds in his garden rejecting the food from Poundland, whereas they gobbled up the stuff from Sainsbury’s. It veered from his impending complaint to the pound store to the gourmet tastes of his birds, and the fact they could be holding meetings to put in a complaint about him etc… etc. It was a good thing Mary had already opened the circle by asking us all to do a prayer; otherwise we may never have got going. 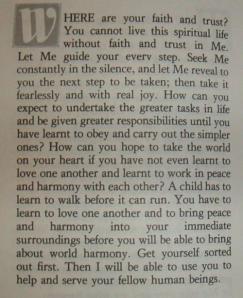 Eileen Caddy’s book Open Doors Within. June 3rd is all about faith, trust and looking for answers in the silence. It’s about being the change on a personal level that you want to see in the world. ‘Get yourself sorted out first,’ she says, then spirit ‘can use you to help and serve your fellow human beings.’

We all said it was true and it had the desired effect of sobering us up for our main activity, which was doing reading from runes.

As not many people remembered to bring their runes Mary decided to do three rune readings for each person in a large group. It was an unusually difficult set to read, and not helped by the fact that the pack contained runes that were not on the key she’d issued us with.

Despite this it was amazing how often two runes came out for different members of the group.

GEBO – It is union, partnership of any sort but you must keep your individuality and self-confidence. For this is the rune of freedom’

THURISAZ – The door is its symbol. Then, observe every moment, every detail. Think it over and get free from your ghosts. Then cross the borders,’

In addition to the two above I also got INGUZ – Claims you to split up relationships or old habits – you are ready for a new start; even for a new child. The meantime could be dangerous. So, keep your good mood.’

In truth it was a little bitty, with people trying to first make out which rune it was and then trying to make sense of the interpretations, some of which was quite brutal. For example, NAUTIZ – ‘Your dark sides block you and make you weak. Investigate what makes you so attractive to bad luck.’

The one that made the most sense to me was INGUZ, especially in light of my dreams about moving and babies.

‘Why did you laugh?’ Mary asked.

I hesitated a second before admitting, ‘There a red hot man on this care and I’m being told about protection, just wondered if I had any in my handbag.’

Well, the innuendoes flew as everyone looked at the card. Wish I’d taken a photo. By the time we came to saying the closing prayers (again all taking turns) someone asking God to help out with my stock for my handbag.

I so needed a laugh, hadn’t thought it was have been at circle. Loved it!