Never on Sunday by Penny Dixon

I’ve just had some good news. A pastor who read Never on Sunday is going to be using it in the relationship ministry in his church.

He said ‘It is a timely book.’

Buy it here Never on Sunday

Last night I got the news that the man who held this strong-back in his hand a couple of weeks ago, the man who was so full of hope for staying power in his sexual encounter, the man who was amazed by how much I could tell about him from his date of birth using numerology, the man who was eager to learn more about the power of visualization as a way of creating a more promising future, the man who told me with tears in his eyes of his mother’s death and the way he felt she was guiding him in life. This man was murdered, shot in his own home.

It happened a week after he came to my hotel room and took part in an NLP (Neuro Linguistic Programming) time-line session. He had participated fully and when he reached his desired goal in his head it was fully reflected in his body. His shoulders were back, his head up, and his hands akimbo. He was, in that moment, the man he desired to be.

It was an unusual session because his ancestors were there willing him on. Through me they told him ‘it’s your time now.’ We both believed they meant it was his time for success – not that it was his time to join them.

I’ve spent many hours reprimanding myself for not understanding the message, but I’ve been reminded by some loving friends that my job is to deliver the message – not to work it out.

I can’t say I’m enjoying this work, especially as this man’s death is such a vivid reminder of the most fearful side of Jamaica. Sometimes it hard to remember that what Jamaica needs is not condemnation but love.

Yesterday I went on a road trip with a load of the 4th year medics I’d met on A&E at UWI. An amazing day out, we hired a minibus and went to The Blue Hole near Ocho Rios. These stunning freshwater waterfalls and azure pools are a relatively hidden gem and certainly a far cry from the tourist trap of the nearby Dunn’s River Falls.

The journey from Kingston was spectacular in itself, traversing up the gorge of the Rio Cobre (and stopping to look at a local highlight – a rock formation resembling female genitalia known affectionately as Pum Pum Rock) and across Mount Diablo. Then, whizzing round blind corners, we drove through Fern Gully which is a marvel of unspoilt tropical vegetation.

Spent a good few hours at the waterfalls themselves.

There are various jumping points into the deep blue pools, some more adrenaline pumping than others, or you…

Rick’s Cafe is rated the 10th best cafe in the world, I thought it was worth taking a look.

Unfortunately it was a rainy day so there was no spectacular sunset, but there were plenty of American tourist. Many came in on the pleasure catamarans that pulled up right into the cove; others came by bus and taxi.

It was fun to watch the official cliff divers (for a tip) and the rookies bracing themselves to take the plunge. 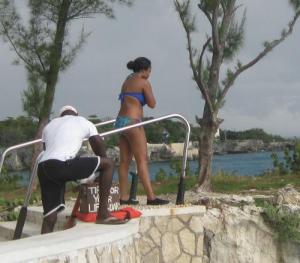 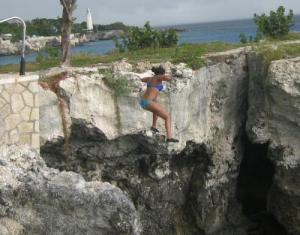 Landed in one piece

As the menu catered mainly to American tastes (even priced in American dollars) my guide took me to a sweet little Jamaican place not many steps away from Ricks. Swordfish Restaurant.

He recommended the lobster and shrimp dish – well, not so much recommended as he ordered it and I copied – served with rice and peas. Oh my Lord, I did not want it to end.

Known locally as ‘strongback’ the plant grows wild, but you need to know what to look out for. I’d been walking past it for days without knowing its true value, until I saw a young(ish) gentleman pulling up the plant, discarding the branches and keeping the root.

When I asked what the plant was he looked at me and asked surprised ‘You don’t know strong back?’

I had heard of the plant but never seen it. It is this part that is boiled and drunk to give men ‘extra staying power’ as one man described it to me. And it’s free!!

Sunday 30th March 2014
It wasn’t the usual Mother’s Day for me this year. Instead of the lie in, followed by a leisurely breakfast and keeping my feet up for most of the day, I went to Accompong, the main Maroon town in Jamaica. 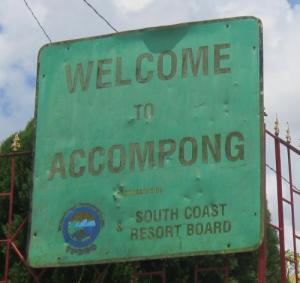 Back in April of last year I was given a message during a psychic development circle to look more closely at the Maroons. It’s taken a while, but here I was, on my way to the town I’d learned so much about.

The Maroons were formed from a group of slaves originally from what is now Ghana and Cameroon. Through amazing guerrilla warfare assisted by the strong psychic connection Queen Nanny, one of their leaders, had with the ancestors, they were able to secure their freedom 100 years before slavery was officially abolished.

Their main residence was in the mountains of St Elizabeth with several smaller communities in Clarendon and in Trelawney.

As it was complicated to get to by public transport I hired a private taxi to take me at a cost of $10,000.00 Jamaican Dollars (Approx £55 British Pounds).

We left the hotel at 8.30 and travelled via Negril. Having done that journey a few times I was quite familiar with many of the land marks.

Roundabout in the centre of Negril

We then headed into Westmoreland’s capital Savannah-La-Mar which is my Dad’s parish. I stopped to take some pictures but realised that the guide books were right about Sav (as they say locally). There really isn’t much to see. Westmoreland, unlike many of the parishes in Jamaica is flat, and I have to confess to finding it quite monotonous.

That is until we came to Bamboo Avenue, three miles of bamboo arching from both sides of the road to form a spectacular green tunnel.

On the other side we came to Peter Tosh’s Mausoleum. It’s hidden behind Prince’s restaurant and we could have driven past it if we hadn’t stopped to ask directions.

It’s a small space in a huge garden, which is used to host a massive concert on the anniversary of his birth each year. It started small and is growing each year.

Accompong is reached by driving through some stunningly beautiful mountains, and some very bumpy roads, but it was worth it. 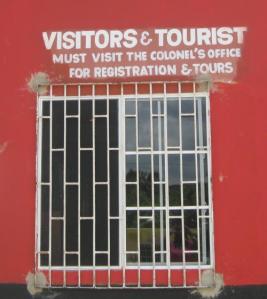 Visitors and tourists must report to Colonel’s office

It is a self governing enclave within Jamaica, akin to the Vatican in Rome. No passport is required but all visitors must report to the Colonels office to either state their business of book a tour of the town.

Mural celebrating the life of the Maroons

The history of the town is fascinating, as is their crime record. There is virtually no crime in this town, in fact in the last 275 there has been one murder here.

They attribute this to the fact that the town was created in peace (as is evidenced by the display of the peace treaty signed back in 1739) and the constant respect paid to, and guidance sought from, the ancestors.

I had the honour of being able to partake in a libation to the ancestors.