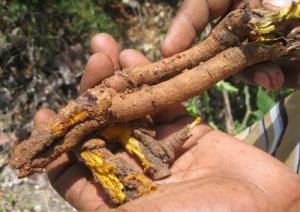 Last night I got the news that the man who held this strong-back in his hand a couple of weeks ago, the man who was so full of hope for staying power in his sexual encounter, the man who was amazed by how much I could tell about him from his date of birth using numerology, the man who was eager to learn more about the power of visualization as a way of creating a more promising future, the man who told me with tears in his eyes of his mother’s death and the way he felt she was guiding him in life. This man was murdered, shot in his own home.

It happened a week after he came to my hotel room and took part in an NLP (Neuro Linguistic Programming) time-line session. He had participated fully and when he reached his desired goal in his head it was fully reflected in his body. His shoulders were back, his head up, and his hands akimbo. He was, in that moment, the man he desired to be.

It was an unusual session because his ancestors were there willing him on. Through me they told him ‘it’s your time now.’ We both believed they meant it was his time for success – not that it was his time to join them.

I’ve spent many hours reprimanding myself for not understanding the message, but I’ve been reminded by some loving friends that my job is to deliver the message – not to work it out.

I can’t say I’m enjoying this work, especially as this man’s death is such a vivid reminder of the most fearful side of Jamaica. Sometimes it hard to remember that what Jamaica needs is not condemnation but love.

One thought on “Jamaica needs love”