It Election Day here today, which is also a bank holiday. Everything is closed. I’ve never known the place as quiet – not even on Sundays as most places are open on Sundays.

We’ve been advised to stay indoors because of possible over-zealous military and police officials who are out in force today to ensure peace is maintained. It’s incredibly unfortunate that the Calor gas choose today to run out as there’s nowhere where we can buy another. Even more unfortunate because three of the volunteers leave tomorrow and were hoping to cook a big meal  tonight as our movement is restricted.

This enforced inactivity has given me the opportunity to catch up on a few administrative tasks. I’ll be finishing the story I began for the three forms I’m doing creative writing with. I’ll also be able to do some long overdue editing. I haven’t even completed one story yet – only six pages edited so far. 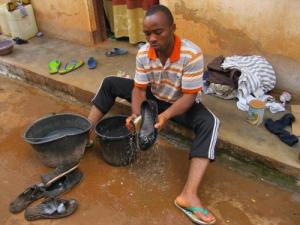 It seems many people are also catching up on some jobs. Chima is cleaning shoes. Washing them is a more accurate description. Seems its the most effective way to remove the encrusted mud. He offered to wash mine for me. I didn’t hesitate too long in accepting.

The bright hot sun of a few minutes ago has just given way to a heavy downpour. As I’m sitting on the verandah I’m able to observe people setting buckets out to catch water, and they, like me have rushed to bring in their washing.

The downpour was short – the sun is out again, but the soil is so saturated that there are little rivulets running down the hill – the same hill I fell down yesterday. Serves me right for drinking beer at 10.30 in the morning.

I’m now on line in my own right. I bought an internet dongle from CAMTEL, the local internet provider. Contrary to the advise that I’d be able to purchase 100 hours for 5000 franks, the truth was that the dongle cost £15,000F and even with the special promotion for teachers I only got 20 hours included in the price. The higher rate only applies if you already have a dongle.

It was the second time in an hour that I had to face an unexpected price hike. I paid 1000F for a sim card a few days earlier on the understanding that it had credit on it. The phone refused to work, not allowing me to send messages – receiving was fine, but it would not facilitate outgoing messages or calls.

Chima and I took it back to the man we bought it from, who suggested that we take it back to the main office in Squares and complain to them, or buy some credit for 500F. My sense of injustice kicked in as I argued that if the sim wes faulty and I’d bought it from him then it was his responsibility to replace it. He said that may be how it is where I lived but here in Cameroon if the sim is faulty it’s up to me to take it back. I could feel myself becoming incensed.

A woman who overheard us said the way it worked is that I have to buy 500F of credit to access the bonus credits on the 1000F sim.

There was a split second when I realised that I was arguing over the equivalent of 80 English pence and my sense of proportion kicked in. I bought the extra credits.

‘You look as though you’re still doubting me,’ the salesman said as I walked away.

Anyway, as a result of the time Chima was prepared to spend guiding me around I now have a local phone and internet connection.

We met the lady who is responsible for making me some beautiful garments in local materials. Immaculate came with us for a late lunch. If we hadn’t been late I would have been able to have the mashed yams which were on special offer earlier. I would have happily settled for the plantains and beans but Chima thought it would be good to try something new and ordered the water fufu with eru for me.

Water fufu is a cassava abased dish which no longer taste of cassava because it’s been processed into tastelessness. There was therefore nothing to detract from overly salty green vegetable eru served in a side dish. At the risk of being offensive it tasted to me like baby’s vomit smells, and the heaps of pepper I loaded it with did little to improve the taste. It isn’t often I leave food, but I had to pass on that one.

Saturday I went to the market for the first time by myself. It was a leisurely experience and I was able to take in much more that when I’d been previously dashing around with a guide. 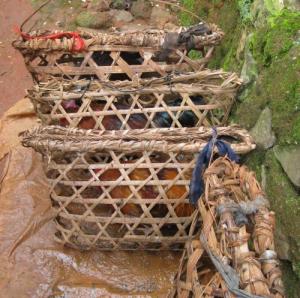 I hadn’t noticed before the chickens brought to market still alive. There are so few refrigerators here that people buy their meet fresh to use that day, or alive if they want to use it on another day.

Three of the volunteers leave tomorrow and three more will replace them. I’m quite excited to meet the new ones. I’ll no longer be the newest on in the house.