No Tim again this week. He was doing a heavy cold, came in handy for people to send healing to later.

We were a smaller than usual group too, even with a new person we were still only six including Mary. She explained that Zoe couldn’t be with us today due to family commitments. She also explained the importance of opening up to the new person, who had not sat in circle before, and said a good way to begin a circle is with a prayer. This is where we invite our spirit guides, angels, ascended masters, God, or Source Energy to join us. She suggested as we were so few in number that we all had a go doing an opening prayer. 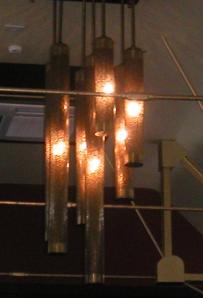 Public praying was something that used to terrify me, but after the last time Mary made us do one (the day me and Tim turned up on our own) it lost its fear. One member was quickly volunteered by Mary to start and we went round in a circle from her. That made me third, and bought me enough time to think of something to say.

Earlier that day I’d had a sharp reminder that my life here is not about ‘getting’ but about giving, about being of service to others. There’s a bit in the Course in Miracles that says something like, ‘only what I’m not giving am I not getting.’ So after asking God to join us and giving thanks for the fact that we could meet today, I asked that we all be reminded of our service role, and that the circle be used for the service of all in it and the wider world. There were short, medium and long prayers, all very expressive and effective.

The next exercise was a guided meditation from a CD in which we were led to an old man in a garden. We had to ask him a question concerning an issue we were facing, and listen carefully to his answer.

I asked about a relationship and whether it was time to terminate contact with a person. The old man answered that when we had learned all we need to from each other the contact would naturally cease.

The next exercise was to pick a card from a tray on which was written one word. We then had to try and figure out what, if anything, the word was trying to tell us about an issue or issues going on in our lives. I pulled GRACE, and inwardly groaned.

Grace is one of those words that I’ve never understood the meaning of, not like love or peace or joy or integrity. Grace is a complete mystery to me, and I said so. Mary offered a definition. That it was doing the right thing even if you know the other person is being a right s—t. If you know better then do better, by recognising that the other person may not be functioning at your level of development.

I instantly found a situation where I could apply that definition, one that had been causing me a bit of grief for few weeks. I thought about how it would be if I approached the situation from a point of love than from judgment self-righteous indignation, and instantly felt more at peace. My Course in Miracles lesson for the day incidentally was ‘I am entitled to miracles.’ And a miracle is a change of mind. I felt as though one had happened there. I had seen a situation differently and it brought peace.

Next Mary asked us to think about a missing member who couldn’t be with us but had suggested that we asked our spirit guides to show us his medical condition. We sat silently with closed eyes for about five minutes. There were no two answers the same, so if we were all right he must be riddled with complaints. I got ‘blood condition, possibly anaemia’. Turned out he has a bladder infection; someone got ‘gall’, so I guess he was the closest.

We then closed by holding hands in a circle, bringing down white healing energy and sending it around the group. Very similar to my very first circle where I saw it in the crystal ball before it happened. We asked for it to be sent out to Tim and everyone else in the prayer book, and then grounded the energy into the earth to help with the earth’s healing.

I think finishing exactly on time was so novel that someone asked if we could have some healing. It was two on one healing. One person sat in a chair, one stood behind with hand on shoulder and one sat in front and placed hands where suggested by the sitter.

I was so tired I was happy to be the first in my group of three. I asked for my wrists to be held as I still have one slightly swollen. It was beautifully soothing, I saw lots of pink light, and I could have happily gone to sleep. Alas no, as it was soon my turn to be healer. I picked up shoulder pain in one partner and back of the legs issues in another. Both confirmed these as accurate. I felt both in my body.

It was a lovely, relaxed session.

I looked up grace when I got home. Here’s a definition I like.

‘The exercise of love, kindness, mercy, favour, disposition to benefit or serve another.’

What about you, what does grace mean to you?