I saw something and then it happened exactly (well almost) as I saw it. This is the second time this has happened to me; once years ago when I was very pleased with the outcome and this time when I was not. 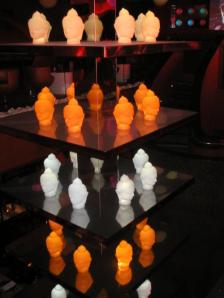 During circle on Monday I asked about a relationship, about whether it was time to cease contact as I seemed to have outgrown it. My friend and I were no longer resonating (as they say) on the same frequency. The answer had been to ‘do nothing it will naturally cease when you’ve both learned all you need to.’

I went home and began trawling through some email correspondence from my friend for clues about what to do when she called me. That was the first shock. She very rarely calls, we mostly correspond by text or email.

She was calling to say she was on her way to Bristol (from Manchester), would be returning the following day and could she stay over at mine for the night for a catch up as we haven’t seen each other in a while.

‘What time?’ I asked, still a little surprised, but not wishing to sound trite by saying ‘I was just reading your emails,’ because I know she’s quite sceptical about some of this stuff.

‘Are you sure?’ she asked, and I wondered if I’d given something away in my voice.

‘See you then.’ She was gone. I think she must be on the lowest tariff ever as that’s the usual length of calls she makes to me. Calls I make to her tend to be slightly longer, but she’s not a great on for the phone. (Must be missing a few pink genes.)

I didn’t think about it too much that night as I was having dinner with a friend and doing a reading for her, so I needed my head clear. (That’s another story) However, on waking on Tuesday morning I was drawn to this image of the text again. I went about the day making preparations for her arrival, only half expecting her to arrive, so clear was the text.

At 16.52 I received a text ‘Just leaving Bristol. Will let you know when I find arrival time.’

OK I thought, I must have been wrong. I thought about the last time I had a similar experience. I was doing a poetry performance and a friend had said he’d come to see me. As I got dressed to go out that night I saw him walk in and sit on a chair by the door. It was like a scene that’s lit up by the flash of a camera. It was that quick, but very clear. I waited all night and he didn’t show. Just as they were about to close the doors he slid in and sat in the chair I’d seen him in.

So maybe it wasn’t going to be another one of those occasions. From six o’clock onwards I kept my phone close in case she text me with little time to get to the station (another of her traits).

At 18.19 I saw her text and was by now convinced she’d be telling me her arrival time. It read:

‘Really sorry. Very tired. Decided to go on home. Hope you not too disappointed. Let’s arrange to link soon.’

There it was, as I’d seen it, only six minutes early.

I text back immediately, Yes, disappointed (could have done other things with my day than sort out her room etc) – a little. I must be getting better. I saw this. The wonder would have been if you’d made it. Yes. Next time.

‘Sorry, intention was there x’ she apologised again.

Now, mild annoyance aside, I’ve been wondering if these are just flukes or if I have the ability to see things before they happen. The first incident was about 2008 and I wasn’t sitting in circle then. I was doing some ascension work at the time but nothing specifically around developing psychically.

Have you had similar experiences? Were they a one off or have they become more regular? Is there any way to work on this area specifically, because, quite frankly it could be a very useful skill.

3 thoughts on “Can we really see the future?”