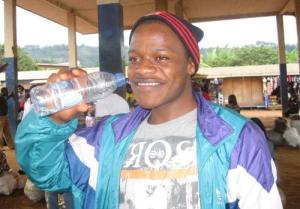 Although I’d prepared my clothes and pretty much packed everything before I went to bed it was still a struggle to find everything by torchlight, as very heavy rain in the night had caused a power cut. I just about managed it, but decided to do my make-up later as I’d need three hands to accomplish that feat by touch. Next time I’m going to bring one of those torches that also acts as a lantern – like the one Charlott (one of the German volunteers) had.

Emmanuel was on time but the taxi was about 15 minutes late. Chima had woken up to see me off and helped to carry my bags out to the taxi. There were already five people in the taxi, two in the back and three in the front (including the driver).

He had to make space in the boot for my two large suitcases which meant moving a few other bags around. Also the live chicken which one of the passengers was carrying to Bamenda. Emmanuel and I squeezed in beside the man and woman in the back and so the tight fit began for the three hour journey to Bamenda.

About an hour into the journey I became aware of an intense headache and a very nauseous feeling in my stomach. Emmanuel later said that he too had the same symptoms, and blamed it on the chicken which was continually using the back of the car as a toilet.

It was lovely to be leaving Kumbo by daylight, and I even remembered some of the villages from my journey into Kumbo just four weeks ago. Then I was so fatigued I could barely take it all in. Now I was fresh. Squashed but fresh. 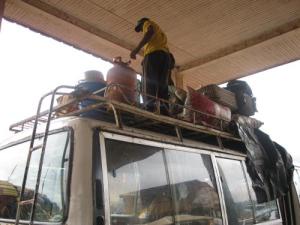 The pot-holes didn’t seem as intense or as frequent – or maybe I’d become acclimatised to them after a month. The trip to Bamenda was therefore fairly uneventful and it wasn’t until we all got out at the coach station that I realised that the leg that had been most tightly squeezed next to the woman on my right was covered in sweat from my thigh to my knee.

I can’t explain the feeling of revulsion as I realised that I’d have to keep my jeans on for the whole day, at least another 25 hours. But I’m pretty quick at making the best of a bad situation, and even the 90 minutes delay of the coach leaving didn’t faze me too much.

I did, however, feel a lot of sympathy for Emmanuel who was still feeling nauseous. He was even persuaded to buy some strange looking powder from a vendor who told him it was good for stomach aches. He also told me it was good for reproduction and offered some to me. I assured him that my reproducing days were well and truly behind me, and he moved on muttering something that I couldn’t quite understand.

Although Emmanuel tried to persuade himself that the powder was working I could see that it clearly wasn’t, and by the time the coach was ready to leave he was desperate to sit next to the window. Unfortunately the window didn’t open by our seat so he swapped with someone behind us.

This is how I came to be sitting next to the ancient gentleman who looked and smelled like he’d not quite managed to make it to the toilet in time. He tried to talk to me in a language no one around me could understand, and I have to confess to reverting to a technique of not engaging in conversation. I got my headphones out, plugged them into my phone and began listening to music. It was the first time I’d done this since arriving in Cameroon.

By the time the smell really began to bother me it was about 12.30, and as it turned out there was still another eight hours to go. The journey which should have taken 6 hours took 9 hours. Not only that, but when it rained the water came in just by where I was sitting. I had to rescue my bag from the floor in front of me. I moved it to my lap as it contained my laptop, but it wasn’t safe even there.

Fortunately I had my raincoat in the bag. I whipped it out quickly and it was this which protected my bag and its precious contents.

There were many stops to allow food vendors onto the coach, and each time that this happened the floor became filled with more and more garbage. The man next to me was one of the main culprits.

After about five and a half hours the bus broke down. It needed a wheel change. I used this opportunity to try and find a toilet as there had been no toilet stops on the way. There were no toilets and I didn’t feel like joining the men who seemed happy to urinate into the canal opposite the market place – in full public view.

By the time we set off again I was beginning to get stomach cramps and realised that I would soon be smelling like the man next to me if I didn’t get to a toilet soon.

I focused all my thoughts on finding a toilet asap. Each time the coach bounced over yet another pot-hole that sent most of the passengers at the back bouncing up and down like a fairground ride, my stomach cramped and I felt my sphincter muscles groan under the strain.

I was on the verge of going to demand that the driver stopped when he pulled into the side of the road to let some passengers get off.  I ran to the front of the coach, got off and told him I needed to use a toilet.

He looked around and said there were no toilets and I could not use the side of the road as it was in a built up area. I was panic stricken. I looked around, willing at this point to drop my trousers and do it in front of the whole bus if necessary.

It a then I saw the garage across the road with a sign that said ‘Toilets’. Not even stopping to ask the driver how long we were stopping for I headed in the direction of the sign.

‘Madam!’ I heard a voice call.

I looked up. It was one of the garage workers.

‘Damn,’ I thought, I haven’t brought any money to pay for the toilet.

He came running over to me and held out his hand.

‘You’ll need this,’ he said handing me a key.

I smiled my gratitude and carried on my flight in the direction of the sign. I opened the door on what was a ceramic plate on the floor with a hole at one end. It was luxury compared to the alternative I’d been contemplating, and I was mightily relieved.

Only afterward did I notice that the water over the sink did not work and there was no way of flushing the toilet.

There was a knock on the door, which in my haste I had not locked.

‘Coming!’ I almost screamed, only to find the same member of staff standing there with a bucket of water. He smiled at me and left. After flushing and washing my hands I returned the key to him. He did not ask me for any money.

It happens like this in Cameroon sometimes. In the middle of a bad situation someone’s kind response changes everything.

I got back onto the coach and sat through another three hours of the bumpy ride before arriving in Douala. It was too late to meet with Fay and JC at their hotel as planned. They were also travelling back  the same night. Our flights were within an hour of each other. The plan had been to meet up and share a meal together and then travel to the airport in the same taxi.

As it was, I just made it to the airport in time to have a brief discussion with them before needing to check in. Stepping into the airport provided the first feeling of order for the day. Stepping onto the aircraft was going into another world. A world without live chickens, or garbage on the floor, or smelly people sitting next to me. 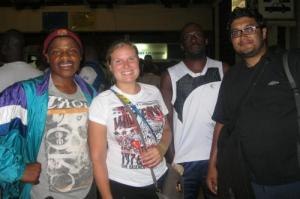 A world in which a complaint about the seating would be taken seriously, unlike on the coach when a woman complained about the way the seats wobbled when we went over a bump (and there were many bumps). The conductor sat in the seat while the coach was stationary and told her there was nothing wrong with it. A world where the rain wouldn’t come in and threaten to ruin your valuables.

Emmanuel Faye Me and JC

I finally relaxed, and apart from a brief conversation with my fellow travelers I slept most of the way. The connections at Charles de Gaulle were smooth and effortless, as was the taxi ride home.

Twenty-eight and a half hours from door to door. Two continents – worlds apart. I need to rest and reflect on what I can take from each for my own growth and development.

Although I slept for 13 hours yesterday, I still need more sleep. Maybe as much as 28 hours.