I’ve had the volunteer house to myself since from Friday about 2.30 p.m. Well, almost to myself. There’s me, the resident mouse that traverses frequently between the lounge and the kitchen, and the mosquito in my room.

The two German girls and one of the English men have gone to a small town just outside Bamenda for the weekend. They left about 2.30 p.m. Friday.

The other two English volunteers who arrived last week have gone to Douala to see the disability project there before leaving on Tuesday. I will meet them again at the airport as our flights are within an hour of each other, but for now I have the house more or less to myself.

After a day of rest on Friday when I spent most of the time writing I had a pretty packed day yesterday.

It began with washing my clothes by hand before going to the office to help Emmanuelle the IT specialist with a website issue. Yes. Me. Helping with websites. There’s nothing like being in a place where the little you know is so much more that what the others know.

New classroom being used even before the plaster’s dry

I’ve shown him the power of WordPress for communicating with the world and he instantly saw the potential for the organisation of a free website.

It was followed by a quick visit to the school to check on the progress as I haven’t been down there since Wednesday. There was a 6th form Saturday class in progress in one of the newer classrooms, and the plasterer was busy at work.

I dashed back to get changed into my newly acquired African gown for a visit to the palace. The entry fee is one chicken and 5 gallons of palm wine, plus a 1000 franks tip for each of the guides.

I watched as my friend Bana bartered hard for a reasonably priced chicken, but he accepted the standard fee for the palm wine.

When we got to the palace gates there was no one there, but a quick call brought a tall man in a black leather coat strolling slowly toward us.

He accepted our chicken and wine and was helped by another guide to take them into the palace. We had to wait in a reception area as women are not allowed in certain parts of the palace.

While we waited Bana explained that the Fon (king) of the palace has over 80 wives who live in many of the house around the vast compound, although most of its vastness was not visible from where we were standing.

The two men re-emerged from the door carrying a pitcher and two bowls. As he approached I realised that the bowls were made from calabash.

We were taken into a reception room which contained a pool table and out of which a small boy was chased.

The guides beckoned to us to sit on a long bench. I sat and crossed my legs. Bana immediately reprimanded me for doing so. ‘You don’t cross your legs in here,’ he said. 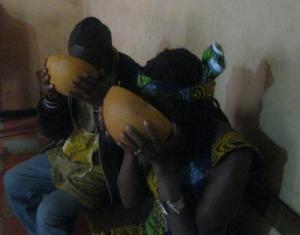 The two guides offered us the bowls and poured palm wine into each. I asked for only a small amount as I’ve not yet acquired the taste for it.

I agreed to have a drop more and reached for the pitcher with my left hand. Again another reprimand. ‘You do not use your left hand to pour,’ Bana said.

‘Why?’ I asked confused.

I got a sense that he was a little embarrassed by my lack of etiquette and I had to explain to the guides that if I was doing something wrong it was because of ignorance not insolence. I told them that the children I work with had named me Bonkiyung which means ‘a fool who has to learn,’ It’s a name I readily accepted as there is still much for me to learn.

As it turned out one of the guides said his name was also Bonkiyung.

‘You could be my brother I exclaimed,’ which broke the ice. Bana went on to explain the circumstances of my visit, i.e a return to my ancestral home. The guides were very interested and were disappointed that the Fon was not at home to greet me. They said that when I come next time to arrange in advance an audience with the Fon who they are sure will be very interested in meeting me. 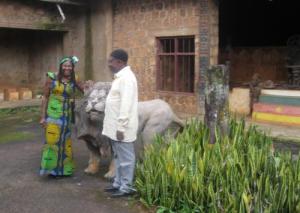 They then went on to show us another quarter of the palace, namely the throne room where the Fon holds court (literally, he presides over disputes).

It was quite a short visit, given the entrance fee, but the guides were very pleasant and very grateful for their gratuity.

‘Because he’s quite an old man now. Some of his wives are actually quite old now, but he can’t put them out so they all live in the palace with him,’ he answered. There wasn’t enough English between us for me to pursue the conceptual as opposed to the practical issue of 80 wives.

I was also unclear about what he called ‘inculturation’ which means that Christian men can have more than one wife which alleviates the need for them to be sent away from the village if they are caught committing adultery.

He showed me some of the slum areas behind the main entertainment area of Squares where people drink corn beer in many small and dingy parlours. He asked if I wanted to try the corn beer.

It’s a thick beverage made from fermented corn and comes in three strengths depending on the length of fermentation. I went for the medium strength and joined the group of men already working their way through several jugs.

A litre of corn beer is 100 francs, compared to 600-600 franks for 750 ml of beer. It’s the equivalent of cheap strong cider, but I have to confess to liking it better than palm wine.

Again I was reprimanded for trying to pour with my left hand. Apparently it’s bad luck. ‘What of left-handed people,’ I asked, but again the explanation was lost in the translation.

The men in the bar mistook me for one of them because of my dress and started addressing me in Lamnso, the local language. Bana had to explain that although I look like I’m from here I’m actually a Jamaican living in England.

They welcomed me warmly and went back to their beers – language can be such a barrier sometimes.

From there Bana showed me some more of the less salubrious areas of Squares before taking me to the Catholic Cathedral and some of the nicer bars and hotels.

I could have danced all night

I left him in Squares to go back to the office to show how very African I was looking. The dress met with much approval.

Then it was time to go home and replace the dress with more ‘night out at Squares’ attire. I met Chima and Immaculate there for a last drink before my departure, and was later joined by Bana who ended up leading me in a dance around the bar. I could have danced all night but alas, my companions attend church on Sundays and needed to leave early. 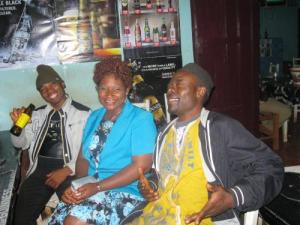 It’s the first time I’ve been able to totally relax and enjoy a social event since I’ve been here, knowing that all my tasks are completed.

Only two more sleeps before I head off for home.

One thought on “Cameroon Experience – To the palace”