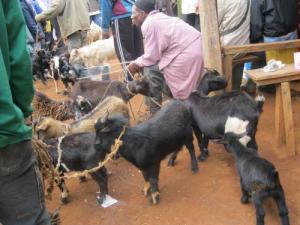 Thursdays is market day in Kumbo. Maybe I should qualify that statement. There is a market everyday in Kumbo, even on Sundays. (Exception is Election Day). On Thursdays, however, it swells to almost twice its usual size. People come from miles away to both sell and buy.

Everything is slightly cheaper on market days because of the increased competition, and fresher too.

Thursday is also livestock day. Livestock sale is held at the far end of the market near the timber yard. I went with a friend who wanted to buy a goat and met him outside the supermarket.

‘Let’s go,’ he said heading in the direction of the market. He seemed in a hurry. 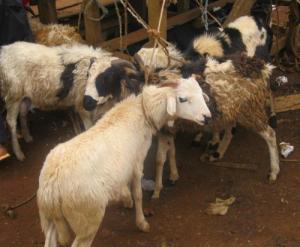 All of these goats were accompanied by men. All kinds of men, old ones, teenagers, Christian, Muslim, well fed and ones who looked in need of a good meal. Men who were still wearing their coats even though the sun was now hot in the sky.

The air was thick with the strong smell of goats. It caught me in the back of the throat when I opened my mouth to speak. It over powered the usual strong body odour of so many of the men here.

Some men had only one or two goats to sell, while others had 6 or 7 strung together in a web of ropes, tangled in such a way that if one went they would all go. A much easier prospect of recovery for the owner, as 7 uncoordinated goats all scrambling in different directions could not go far quickly. 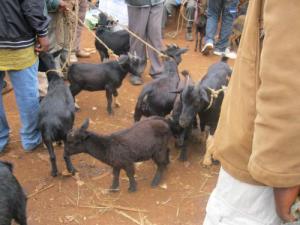 My friend weaved his way through the men, rubbing shoulders as he squeezed through the more tightly packed ones. Not wishing to rub shoulders I tried to find the less direct route around them.

I followed him around for a while trying to make sense of what was being said, but they were haggling in their own language which left me out of the loop as I’m not skilled enough to understand the numbers.

I decided to stand on the edge of the crowd by a BBQ stall where a young man was busy roasting small pieces of meat on skewers. I watched as he turned them. He also turned bananas and small plantains that sat equally uncomfortably on the iron grid.

I took the opportunity to make a small film. One of the advantages of the video camera I have is that it looks like a phone. So when I’m filming it just looks like I’m talking on the phone. People are less suspicious than when they see me with a camera.

I remembered the man at the motor bike taxi rank that challenged me for taking pictures of them without asking or offering to pay them. I’d blagged it by saying I was taking a picture of the sign behind them. 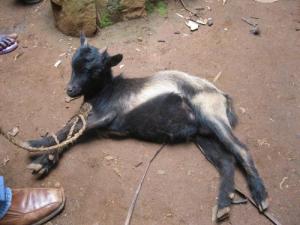 Anyway, after a while my friend found me and said he’d stuck a deal. The goat was bought. He wasn’t much more than a kid (if you’ll excuse the pun) and I watched as my friend tied his two front legs and then his two hind legs together.

‘Let’s get a bike for speed,’ he said and we found a rider who was more than willing to take a goat on this bike. So me, my friend and the goat were settled on the bike.

The goat sat in front of the rider with his legs straddling the rider, pointing backwards. My friend held on to them while I gratefully sat at the back of him. The only time I’d passed up an opportunity to sit in the middle.

We were dropped off at my friend’s house where he was going to kill the goat for a celebration. He asked if I wanted to watch. I should have said no, but I was curious to see how different this would be from the chicken Chima killed a few weeks ago. 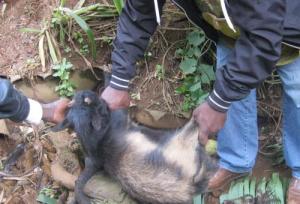 There was little ceremony about the whole affair. My friend had enlisted the help of one of his friends. He held the goat legs tight. His friend held the goat’s head and made a sharp incision in its neck.

There was a gurgling sound like bubbling larva as the bright red blood spurted out of the small hole at the goat’s throat. His friend grabbed a bowl and caught the blood. After a while the blood thickened and the spurt changed to a flow. His friend held the goat upside down till the flow changed to a trickle.

They then proceeded to disembowel the goat. My friend made a fire in the outside kitchen over which he burned all the hair off the goat. Then he cut off its head and its feet from the last knuckle down. 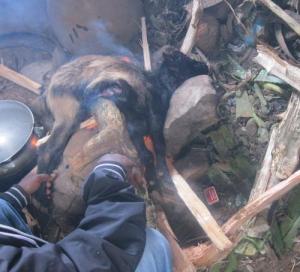 Goat well on its way to becoming dinner

I watched as he surgically dissected the animal into joints I’d recognise in a butchers shop in England. He handed me a piece and said ‘you must cook this and share it with the others in your house.’

It was Chima’s birthday and I decided to cook it as a birthday treat for him as I know he likes goat.

In the end five of us ate the goat curry I made. Two of us had a tiny amount, three ate heartily and the vegetarians stayed well clear.

One thought on “Cameroon Experience – killing a goat on market day”