When the four English girls said they were going out for a drink and fish and chips I replied that I hadn’t been away from it long enough to miss it yet.

‘Oh, it’s not the usual fish and chips,’ Joanne assured me. It’s local fish and the chips are not the same as in England.

‘Is it far?’ I asked, still a little hesitant and looking for a reason to back out.

‘It’s a little way but we just jump on a bike,’ she replied.

‘Come on you’ll enjoy it, and it’s your birthday after all.’

‘OK.’ I gave in. But when I realised that they planned to go straight from the office where we’d just had a meeting with the director, I saw another get out clause.

‘I can’t go with all these bags,’ I said looking at my shopping and the bag containing the cassava and pear that one of the office workers had given me to take back for all the housemates.

I thought I’d cinched it as they had already hailed bikes, and three of them were already mounting them.

‘No worries,’ Joanne said. ‘I’ll come back to the house with you then we can get a bike together.’

There was no get out. Did I really want to go out with a bunch of 21 year olds drinking on a Friday night? Even if it was my birthday.

But what was the alternative? Staying in with a bunch of 18 – 25 year old Germans who were having a party at the house? Well, with that option I could always have gone to my room.

I’m so pleased I went out. The bike was a humorous experience. Joanne suggested that I sat in the middle between her and the rider and hold on tight, as it was my first time. I put my arms around the young man’s waist and as we negotiated our way around the potholes (bikes do this easier than cars) I asked if it was OK to hold him that tight.

‘It’s OK because I’m a single man,’ he replied laughing. ‘It would be a different matter if I was a married man because then I’d belong to somebody. But you can hold me as tight as you like.’

We paid about 60 pence for the ten minute ride, that for the two of us, when he deposited us in what Joanne called the Square.

It was like a much scaled down version of Broad Street with lots of bars and eateries. The difference was that the eateries were mostly on the street. Food is bought and prepared on the street and brought to you in the bar. It’s just like a restaurant in that they wait till you’ve eaten before asking for payment. It’s incredibly trusting of them as we could have just left and not paid. But there seem to be that trust here.

I ordered what looked like a large snapper for and chips for less than a pound. It was beautifully BBQed and very, very, tasty. The chips were small round pieces of potatoes that tasted as if they’d been cooked in salt. That’s something I’ve noticed here. Lots of salt and lots of sugar. I guess there will be the commensurate health issues but I haven’t checked yet.

Anyway, the night was delightful. The girls were great company and even pointed me in the direction of what seem to be an African spiritual church not far from our house. They’re also going to see a natural health practitioner tomorrow. I begged to tag along. 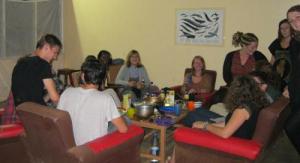 As it was bucketing down with rain by the time we were ready to leave, we got a taxi back. We arrived to a warm chorus of ‘happy birthday to you’ which was begun by the German people and ended by everyone.

I stayed with the party for about an hour sipping on my gin and tonic and marvelling at the strangeness of life. Who would have thought I’d be spending my birthday with 16 Europeans in a house in Cameroon?