This was the last exercise of the course and the only one that was optional. By now I was beginning to feel the effects of the lack of sleep.

Essentially it was to give us a chance to experience what Simon and Martha had just done for the two participants in the healing canoe.

The exercise involved journeying to the lower world to see if there was a power animal that once worked with your partner who wanted to return and help.

The instructions were these.

Go to the lower world

Gather the energy of the animal and bring it back

Place the energy into the client at the heart and head

Ensure the energy filled up the whole body

Do NOT bring back snakes, reptiles dripping venom, or insects of any kind

As before we would take it in turns. I decided to go first.

My partner lay down on his ample cushion and I made sure a part of me was touching him as instructed.

As the drumming began I set the intention for the journey:

I went down the tree roots again and met the jaguar as before. By now we had built a great relationship and after the bear rug incident I trusted him completely.

I asked if he could take me to an animal that used to work with my client. Immediately he showed me, through an opening, a gazelle.

‘Why don’t you ask it?’ he said as the gazelle made its way over to us.

‘Are you the power animal for my client?’

It nodded and ran off playfully.

‘I need to see it three times,’ I told he jaguar.

‘I know,’ he said knowingly, then proceeded to show me the gazelle through two other openings as we walked along. These openings just seem to appear out of nowhere, and the gazelle was there.

It came willingly to have its energy gathered up, and I had to stretch my arms up, down and sideways to make sure I’d gathered it all. I could imagine how ridiculous I must look to someone who wasn’t aware of what I was doing.

Once I had it all gathered up I thanked the jaguar who had simply looked on, and told him I had to return. On this occasion Simon had said we didn’t have to wait for the call back if we were finished before.

I made my way back to the tree root and, with the gazelle’s energy gathered closely to my chest wondered how I was going to get back up the roots without losing it. I felt something hook into my braids and began to winch me up the roots.

I carefully placed the energy on my partner’s chest and blew hard to make sure it entered his body. Then, as instructed, I blew the remnants into his head.

I found the rattle and when I was satisfied that it had filled up his body sealed it in by shaking the rattle all around him. I saw other people doing the same thing and realised how odd we would look to a passerby.

During the feedback my partner said he could feel the energy enter his body, and wasn’t surprised that his animal was a gazelle, as all his animals were playful ones.

When we did the switch over I lay down and totally went with the instruction that all I had to do was wait and receive. Happy days, no more work. I was drifting into the beat of the drum when I felt my partner’s hands on my chest. As he blew a wave of energy shot through me causing minor tremors at first which soon became convulsions. The drumming became louder and more intense and the convulsions became more frequent and pronounced. I was being totally energised, shot through with something invisible that revived me so that when the drumming reached a crescendo I was fully charged and ready to run a marathon.

At the feedback my partner said my animal was a massive eagle who was virtually chomping at the bit to get back to me. Its energy was so powerful he struggled to bring it back, but he was pretty confident that he blew all of it into my body.

During the final large group feedback I received two profound pieces of information.

1)      One of the women said she had an intense sexual experience. At last! Someone else who admits to this. I spoke to her later. She said, ‘use it; it’s a gift’ but that I should journey on the most appropriate way to use the gift.

2)      One person said she’d been told once that her illness was caused by evil spirits, and wondered whether we risk putting evil spirit into someone in this exercise. She said a shaman had removed the evil spirit and her condition got better.

Simon said nothing was created evil. What we perceive as evil spirits are things that are in the wrong place. The shaman’s job is to remove it and put it back in its rightful place.

I was trying to explain this to a friend and used the analogy of mint. It’s a very useful plant, but left to its own devices it will overtake any space in which it’s planted. It will kill off other plants in its way. That doesn’t make the mint evil. If it’s contained in its proper place it’s simply a useful plant.

Some gardeners say ‘a weed is only a flower growing in the wrong place.’

Viruses in their own habitat are not harmful, but they are when they inhabit human bodies.

This was extremely reassuring for me, and I left feeling spiritually replenished and with a lot more knowledge. 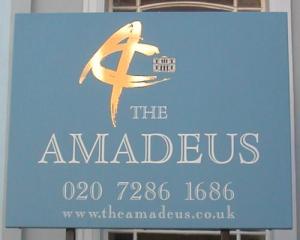